The parishes of Petty and Ardersier are comprised largely of organic farmland, with forestry, woodland and shoreline habitats. The climate is mild, and dry,  though the prevailing south westerly wind can be fierce at times.

Local naturalist, Naveed Bhatti has kindly provided details of what to expect at various times of the year. It makes fascinating reading. Our photo library is a bit thin so if you have photos of the orchids, butterflies and wildlife in action we would love to see them and possibly put them on the website.

Ardersier Bay is a shallow bay, away from the main channel in the Inverness Firth, and backed with glacial moraines. The seashore has one of the longest pebble ridges in the UK. There is a wide panoramic view extending down the Great Glen, which takes in the mountains of Ross-shire. Showers can often be seen coming from the west well before they arrive, but it also may be raining in Inverness for most of the day whilst staying dry in Ardersier as we are situated at the edge of the rain-shadow. 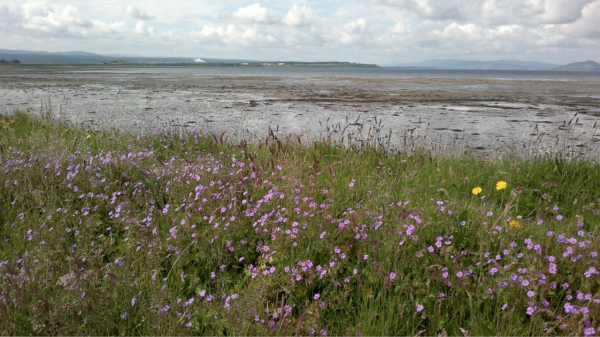 Look out for the ephemeral pools which hold frog spawn and other freshwater invertebrates. These pools may dry out for only a short time in wet years, or for much longer during drier times.

Ospreys can be seen fishing over the bay, along with common, arctic and sandwich terns. Look out for the splash of a salmon or sea trout in the summer and along the shore the ringed plover and rock pipits.

Others birds may only stop for a while on their way further north include chiffchaff and grasshopper warblers. The Common has two rare specialties, which people come to see from far and wide: the Coral root orchid and Dingy skipper butterfly. 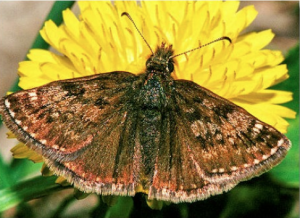 Swallows and sand martins scythe through the air over the shore and bay in calm weather, picking off insects, sometimes low over the water, sometimes high in the sky.

Marine life thrives in the summer and numbers of invertebrates, worms, crustaceans and shells increase, providing a bounty for the wintering waders.

Lugworm and cockles are particularly common, but plants also increase like the seaweeds and relatively rare seagrasses.

Young gannets visit to fish in the bay in late summer with their parents, and Arctic skua can be seen harrying the terns to get them to regurgitate their fish.

Mushrooms can be found such as horse mushrooms, birch boletes and puff balls. In autumn and winter, seaweed gets washed up along the shore in the storms.

This provides habitat for invertebrates, and in turn, rich feeding for starlings and other birds.

The numbers of curlew, oystercatcher and redshank are swollen with bar-tailed godwit, sanderling, turnstone, and whimbrel on passage. Geese fly overhead in large numbers, especially pink-footed geese, distinctive with their double squeaking call. Whooper swans visit the bay along with small numbers of mute swans which are present all year round.

Eider, long-tailed duck, shelduck, mallard, and widgeon are also seen in the bay along with occasional Slavonian grebes fishing.

Occasionally, in cold snowy winters, snow bunting can be seen feeding through the grasses and thistles along the shore line, whereas goldfinch and linnet are seen much more often. Also in the early winter, Ray’s bream may be found up on the shore.

These fish usually live far to the south and west off Ireland and Portugal, but can spread into the North Sea after years when the currents are warm and favourable. When the temperatures drop in autumn and winter, they don’t survive and are washed onshore.

Seagulls are often seen, like the common gull which is relatively common here unlike in most other places, black-headed gulls with their smart dark brown faces in the summer are distinguished throughout the year by their white wedges on their wings. And of course there is the herring gull, which has a claim for being one of Scotland’s most important birds as it is found in some of the highest numbers here compared to other places in the world. 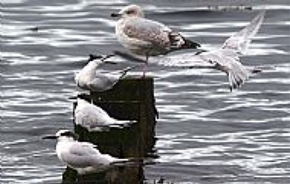 Red kites can occasionally be seen quartering the nearby fields, as do buzzards and kestrel. Sometimes the distinctive croak of a raven can be heard as they make their presence known in the area.

Bottlenose dolphin can be seen in the bay near the shore as well as further away towards Chanonry Point of course, and they may be responsible for killing the occasional common dolphin and porpoise which get washed up on the shingle ridge.

Look out for carrion crows which have learnt to eat shells by picking them up, flying up and dropping them on the stones to smash them open and get the contents.

On the Common stoats, roe deer, foxes and rabbits inhabit here, and the occasional feral cat which has escaped and is living wild can be seen. Hopefully these cats have been sterilised so they won’t spread any domestic genes to nearby wildcat populations. If you are lucky you might see mice, shrews or voles.

Plants to look out for are gorse blooming nearly all year round, hawthorn, blackthorn, ash, pine, birch, alder. Also there are raspberries, dog rose, meadowsweet, teasel, blackberries and orchids.

Nearby, in the woods, tawny owls can be heard at night, and barn owls can be seen flying over the farm fields, along with tree sparrows, house sparrows and redwing.

In the night sky, look out for northern lights and meteor showers. At certain times of the year, the planet Mercury can be seen setting shortly after the sun in the west, and Venus can be seen as a bright morning or evening star.