Around 1923 the War Memorial Hall was built then dedicated to those who died in the Great War and World War Two. 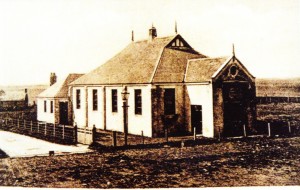 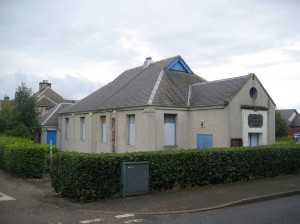 Over the last 90 years the hall was a popular place for locals to hold dances, school events such as prize giving and concerts. However, at the turn of new century it was clearly getting tired and prone to vandalism. 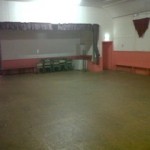 The Ardersier War Memorial Hall committee had over £30000 from years of fundraising and took advice from architects and other professionals on its future and how it could be improved.

One of the options was to knock it down and start again. This was tempting as it would allow to take advantage of the latest building techniques in order to reduce running costs however, the valuations came in at around a million pounds and in those days it would be very difficult to raise that kind of money in such a small village. 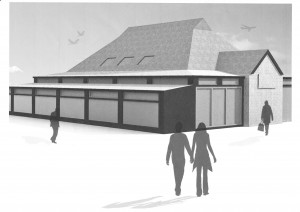 The committee decided to keep the building and local architect Robbie Kerr came up with a wrap-around concept.

Due to funding constraints we were able to split the renovation into two phases.

The main objectives of phase 1 was to replace the floor, remove the old block containing the kitchen, toilets and storage and build a new toilet block. 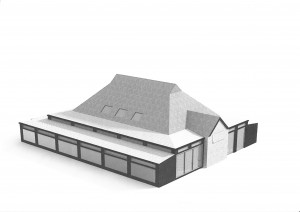 The budget proved too high plus it was felt that the kitchen should be kept at least as an area for hot water and for third party catering. By doing this we saved money in the demolition of the block and we also removed a shower/baby change area.

In February 2013, we put to tender and received a wide range of quotes for the work where McLeods were chosen, although not the cheapest, their reputation was solid and reassuring. The proposed start was June.

Despite the slight delay due to building warrants the rate at which the builders progressed was incredible and it was soon realised that decisions had to be made quickly in order for the project management by McLeods go smoothly and on time. Also, the weather was pretty good and they were able to get the toilet block wind and water tight within a few weeks. 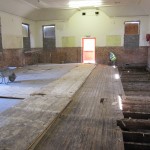 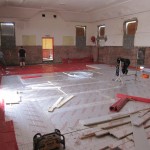 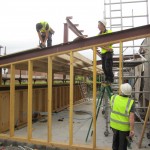 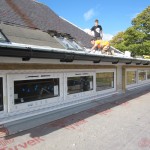 As one of our funders is from the Climate Challenge Fund where all the insulation for the ceiling, walls, draught proofing and floor was paid for by them it is also about raising awareness of how we use energy and reduce the carbon foot print. Although not directly related, it was soon time to make the decision on how the hall should be heated. 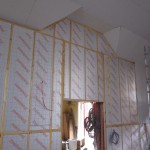 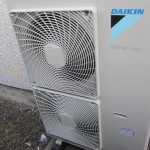 The hall was never easy to heat. The loft had no insulation and there was none in the walls. The windows were boarded up but still draughty. It cost a fortune to run. After a lot of deliberation and study the committee went for using an air source heat pump to drive the underfloor heating. It was a crystal ball situation as with this system it can take a while to heat but with all the insulation and that UFH will heat the air to head height, it is hoped that when phase 2 is complete the building will be well insulated to the point the system can be kept on almost indefinitely and running costs can be kept at a minimum for the users. Who would want it on during a ceilidh or fitness classes anyway? 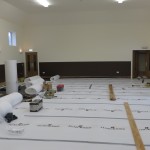 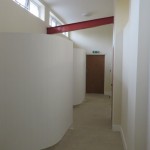 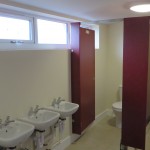 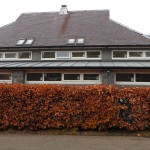 The committee received the keys on 16th December 2013 and due to the Christmas period it was decided to hold an open day on the 9th January 2014 for all to see and to allow time for press releases and other media. The Inverness Courier and Nairnshire Telegraph covered the story with Mary Douglas being the centre of attention thanks to her support throughout the years not only for the hall but with many events and projects. 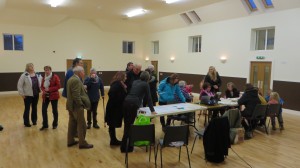 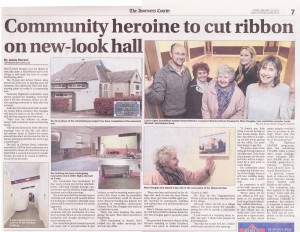 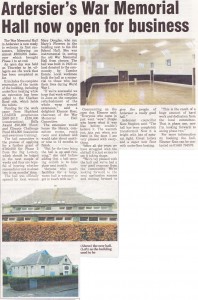 The build – who and what

During the year we put on some ceilidh’s, BBQ summer dance, Halloween parties and more. We have been borrowing the stage from Ardersier Primary School and chairs from the church. This was time consuming and not exactly convenient for all involved.

In December 2014 we successfully applied for £10,000 from the Awards for All Scotland to enable us to have our very own stage and replace those rusty, 30 year old chairs to protect the new floor. On the health and fitness side, there will be a badminton court with new stands and net, training paid for a badminton coach and a wide array of sporting equipment like benches, markers, pop-up goals and mats.